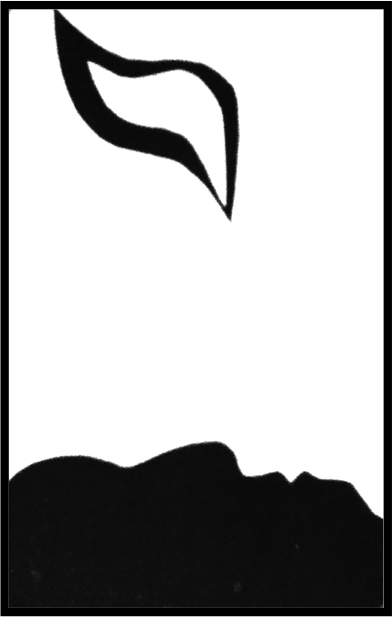 Essence: The image representing a finger or hand, symbolic of the microcosm, carries all potential for manifestation. Withdrawing into our center we invite Holy Wisdom to infuse us. Complete in our self we can join others or remain single. Rider-Waite Tarot: Hermit

Yod is the number 10, a finger, or a hand. As the smallest letter, it holds all potential to become manifest.

Unique, singular and alone, although complete in itself,Yod still longs to be together with another. Yod is the gravity which unites, the yoni drawing the lover in, the moon pulling the tides, the Absolute Creative Essence, God in unison– magnetic Wholeness. As the central point, Yod simultaneously ends one cycle and begins the next, for following its ultimate contraction, Yod must expand outward again.

Because the Yod represents the most microcosmic particle, it indicates the necessity of withdrawing into our center, our point of quietude, and it speaks of the place where the still, small voice can be heard.

If we are open in a state of creative rest, of expectant anticipation of union, of Shabbat, then inspiration will come. This is the time to wait and trust in the Holy One. We are required to pause, just as Moses at the Reed Sea did. With his hand (five fingers) and his rod (the tool or sixth finger) raised, he waited to be united with the seventh, the Yod of God the Divine Creative Essence. It is these seven together which cause the sea to open. The miracle can happen only when we are united with Creator of ALL, the Eternal One. Thus, Yod teaches us not to overwork or strain, but to combine work and rest, striving and relaxed openness. It urges us to become patient and expectant like the dry earth awaiting the first rain.

Where the Aleph is One containing the multiplicity, the macrocosm, Yod represents the microcosm. This letter, like the recently discovered Higgs Particle, has a magnetic quality, which draws others in to join it to co-create a new essence.

Just as the Rider-Waite Tarot Hermit card indicates an internal journey, the Yod expresses the need for being alone, having a restful and contemplative openness of mind.

REVERSED
If the Yod is reversed, it means we are trying too hard. We

may not know or recognize what we have. Here, it is also the still small voice, begging us to stop and listen.

This reversal serves as a reminder that, just as a woman in labor must combine work with openness, periods of deep faith and relaxation for the birthing process to succeed, it is the same with all that we would bring to birth.

“I sleep, but my heart waketh: it is the voice of my beloved that knocketh, saying, ‘Open to me my sister, my love, my dove, my undefiled; for my head is filled with dew, and my locks with the drops of the night.” (Solomon’s Song, 5:2)

Yod reversed reminds us some things must not be forced. That which we desire comes only when we, and it are ready. The land lies fertile, waiting for the first raindrops.

everywhere the dew so small
the smallest inevitability