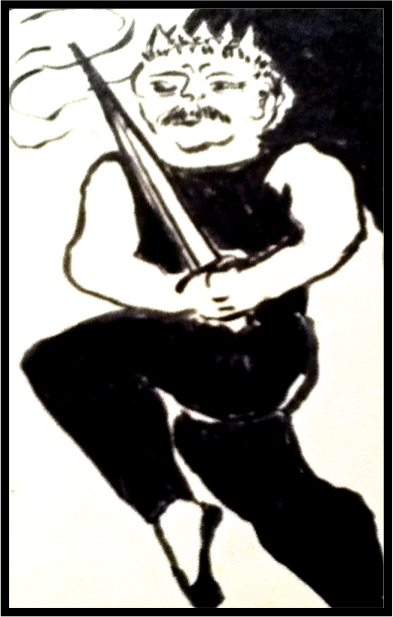 Essence: This masculine archetype reflects the nature of one who, to understand information, must physically interact with it. Attuned to the physical world he is often mechanically gifted. He has keen intelligence and is able to cut to the heart of a matter.

This archetype, like all the archetypes herein, regardless of language used, might not only manifest as a male. It could refer to a female who also has these qualities.

The Prince of Swords is a kinesthetic thinker. He might have a knightly self-image, seeing himself as a man of action rather than an intellectual. His intelligence usually lends itself to the sensate world. Being brave and physically, daring, this archetype is one whose thoughts usually require physical expression. Since he often sees things in black and white, good guy/bad guy terms, he may be a law enforcement officer or soldier. He’s the type of person who easily enters the active professions: fireman, police, navigator, explorer, pilot, bodybuilder, etc. Mechanically gifted, he is the guy who can fix or build anything. When his spatial abilities combine with physical skill and control he may be a dancer, athlete, builder or architect.

This archetype demands physical interaction to fully understand, process or ground any intellectual matter we are engaging with.

It’s possible the Prince’s keen intelligence and insight bestows an ability to cut to the heart of a matter. As well as a need for physical adventure, the exploration of the unknown, internal or emotional realms would satisfy both intellectual curiosity and the need for expansive self-expression. These traits could make for a physical therapist, explorer or even a dancer, actor or any type of performer.

When reversed, the Prince of Swords can be a card indicating a nasty, verbally abusive or violent and dangerous person.

He may be crude, a bully, or one who easily resorts to brute force as a means of attaining his desires. His thinking may be immature, self-centered, crafty, and lacking in empathy. Motivated by a desire for power or feelings of hatred, fear or envy, he can resort to criminal behavior, becoming at worst sadistic, dangerous especially to women, children and all others whose vulnerability makes them easy victims.