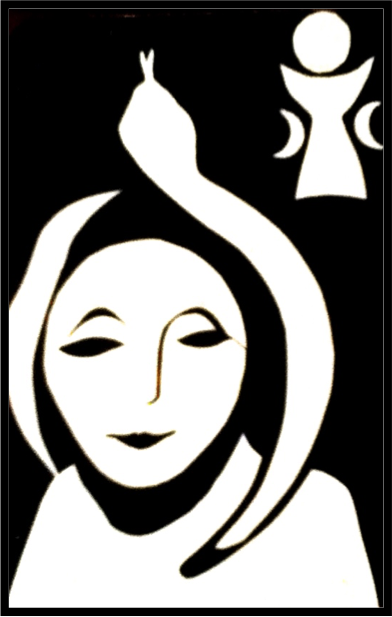 Essence: One whose life is permeated with spiritual and emotional connectedness. She is empathic, compassionate, flexible, nurturing and devoted in her intimate relationships. Expressive of the Holy Feminine, she is egalitarian, affectionate, sensuous and sexual.

The Queen of Cups is a self-directed, non-authoritarian, religious or spiritual woman. Being one whose life is permeated with an awareness of her relationship to the people and the life energy around her. She imbues all with her sense of spiritual connection to the Whole. She is the archetypal female and as such may be a mother, priestess or possibly an artist, poet or musician. Wherever her creative energy is engaged she expresses and reflects her emotional connectedness. At her best, she is intuitively capable of giving to each what they need; food, affection, laughter, spiritual comfort, or compassion. Open- hearted and generous, she can be imaginative and romantic, and also a devoted mother, whether or not she has children. A lover of life, she is responsive to the needs of those around her.

Because of her sensual connection to the natural world, the Queen is sensitive to the constantly changing flow of her own energy cycles, physical needs, and her connection to the Mother of All. With the merging and blending properties of water she is acutely sensitive and aware of the relationships between things, even those which appear to be unrelated.

The emblems of this archetype are the moon, the gentle dove and the transformative serpent. She wears the serpent on her head like the priestesses of the Great Mother. A cup surrounded by the triple moon appears behind and above her, representing the many trinitarian aspects of creation: blood, milk and water; life, death and rebirth; fire, water and air; youth, maturity and age. All are the Goddess’s domain.

Like the water element to which the Queen is connected, she can be unpredictable and moody. She can change, sometimes in a flash, from equanimity to wrath; or from a thunderstorm of temper to joyous laughter to the calm of a placid lake.

When reversed, her archetype may represent an overly temperamental woman given to self-dramatization or irrationality. She can be a raw nerve. Relationships can become problematic and difficult to maintain due to a tendency to manifest the more destructive emotions.

The important thing to remember in this reversal, is whatever feeling she’s manifesting is subject to change in a relatively short time. Although her highest energy is love, it may be immature or narcissistic, in which case there is a need to learn and develop emotional restraint and compassion for herself and others.

The Queen of Cups reversed may also simply indicate that the person manifesting the qualities of the archetype (of the upright or reversed card position) is male rather than female.