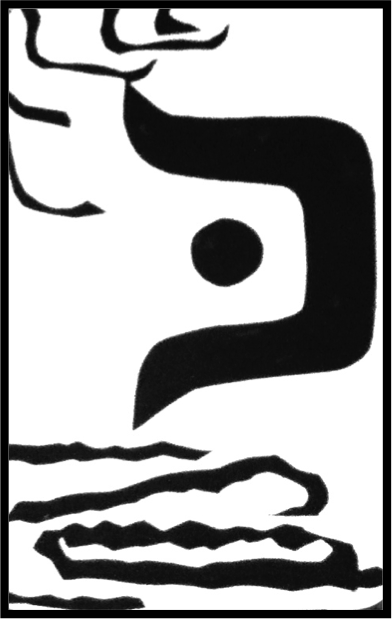 Essence: Symbolic of the palm of the hand in its three positions: empty to receive, containing another or grasping, and compressed into a fist. It may indicate a turning point. We are processing a change in outlook or outward circumstance, a change in fortune. Rider-Waite Tarot: Wheel of Fortune

Kaf is the number 20. Symbolically Kaf is the palm of the hand. The letter Kaf has three forms. First, without the Dagesh, or center dot, the hand is empty, inviting or letting go. The second form contains the Dagesh and could be seen as a hand gently holding another. In its third form, the hand is contracted into a fist, squeezing.

Without the dot, the palm of the hand is empty, expectant, cupped to receive riches and welcomes life’s creative energies. The center Dagesh here is the archetypal and eternal while encircling it is the specific and ephemeral form of the Kaf. Kaf is living life with energy and appreciation for the gift. It is the river of life filling and flowing eternally through us. We are always shaping and being shaped.

The cycle from the Aleph through the Yod represents the contracting of the energy to its center. As the central point, Yod simultaneously ends one cycle and begins the next. Following its ultimate contraction, Yod must inevitably expand outward again. Kaf with the Dagesh symbolizes the primal eternal microcosmic essence of Yod (as Source) surrounded by the many forms of the macrocosm, the eternity of Yod surrounded by the transitory nature of Kaf. The Kaf is therefore the Bet inside out. Where Bet was female, forming from her projected energy the beginning male within her, the Dagesh in the Kaf is the essential Female encircled by the Male energy.

Comparable to the Rider-Waite Tarot: Wheel of Fortune card, Kaf is the sun that rises, shines, and sets only to rise once again, like ancient ritual re-enactments of the myths of a God-King who, once chosen, crowned and exalted, is given the world and then sacrificed, only to rise again. In a reading it is indicative of a turning point, a time for changing direction, for moving on. It may indicate we are processing a change in outlook or change in fortune.

Kaf reversed may mean we are resisting a necessary change. It can indicate an unhappy turn of events due to the time or our own inability to adapt and go with the flow. We may sometimes think a change of fortune is bad luck when it might actually bring good fortune.
When this card is upside down it can be seen as an indication that we are holding too tightly to some thing, some idea or someone. Here is a warning not to make our holding a prison. Kaf reversed reminds us that even “Truth” if squeezed too tightly, becomes the lie. We are called to learn and understand the important distinction between holding and grasping. Sometimes the only thing we can hold on to is our awareness that life offers no security except for the certainty of change.