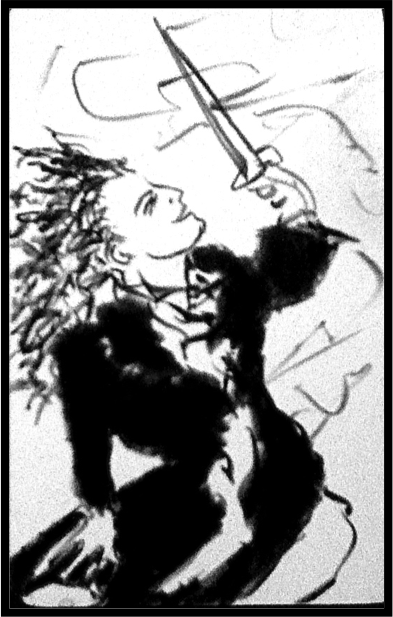 Essence: The Princess archetype describes a mentally quick, energetic and witty youthful person. It may be a warning against impatience and the danger of acting precipitously. It could mean the swift approach of an important message, possibly of a legal nature.

When the Princess of Swords refers to a person, it’s someone who is mentally quick, energetic and witty. Often this archetype has a biting and insightful sense of humor. Using her wit like a rapier, she can cut others to ribbons or cut through to the truth of a matter. She can be iconoclastic, outrageous, daring and outspoken.

Like her brother, the Prince of Swords, she may also be a dancer or one who thinks with her body. She has a skillful, highly developed physical awareness.

Being enthusiastic and youthful, whatever her chronological age, her impatience may make her seem unsympathetic or insensitive when she is confronted with the troubles of others. Not being one to weep into her beer, she may be impatient with the bad luck of others or of her own bad luck, health problems and weaknesses.

The Princess of Swords may not refer to a person, but rather may indicate a messenger swiftly arriving with news. It can often indicate communication on a legal matter. Other cards in the reading determine whether the news it brings will be good or bad.

Sometimes the Princess of Swords, whether upright and reversed, can be interpreted as a warning against actingimpulsively or without thinking. Too often our ill- considered words have a disastrous effect on our relationships. Many terrible accidents and even fatalities are also the result of careless or thoughtless action.

If in a reading this card refers to the Querent, it can be a warning that our own quick mouth can be our worst enemy. As above, the Princess of Swords may be interpreted as a

warning against acting precipitously. In this case the warning is even more urgent. Again, it’s important to note that most terrible accidents and fatalities are often the result of an ill-considered, impatient or ungrounded action. Also, be aware there is a danger of attracting another’s impulsivity to ourselves.

The Princess has appeared to warn us against indulging in behavior or weakness that, while appearing harmless and inviting, can be disastrous. Here the warning is to steer clear of anything which, while appearing charming, weak and small, might tempt us into thinking it will do us no harm. If we dally, if we ignore or underestimate it, it can tear our lives to ribbons.

When reversed, the person described by the Princess of Swords may be self-involved, controlling and lacking in compassion.

Princess of Swords reversed may also refer to a person withsome of the positive qualities listed above; however, she is cunning and prone to gossip as a way of attaining power. This might make her a dangerous and often hypocritical opponent.

Finally, this reversal may appear as a warning to look before you leap in regards to actions and relationships. Also, to not place trust in a person or message since motives may not be as harmless and transparent as they appear.