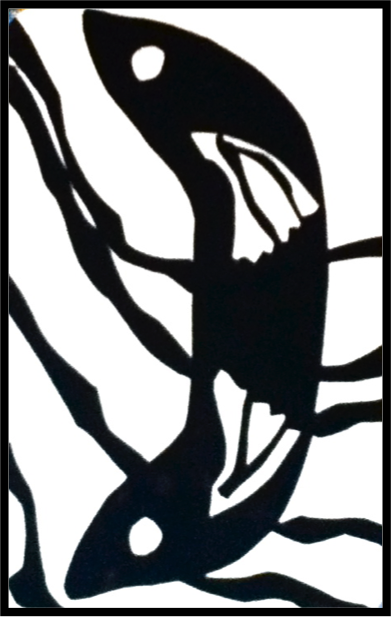 Essence: As a fish, Nun, dependent on Mother Water, also symbolizes a child or fruit. More importantly, Nun is symbolic of the soul, which is viewed as swimming between worlds, integrating opposites as it unites the truth of what we are with all we can be. The Eternal sings in our depths. Rider-Waite Tarot: Temperance

The Nun is the number 50. Its symbol is a fish. Because of its dependence on the Mother Sea, Nun also symbolizes the child and also any fruit or produced being. It represents all living beings that reflect and express the fecundity of The Mother.

Released from Mother Mem, the child Nun, no longer enclosed in the watery amniotic depths, begins the individuation process. While still connected the child no longer cries to its mother for salvation; no more does she depend on another to be complete.

The plunge into the deep, the sacrifice of the ego’s need (required in Mem) has freed us, so that now we can see and finally accept, own, and own up to both our positive and negative characteristics. The soul has become an integrated being in itself.

Having risen with the Lamed and descended into the oceanic depths of the Mem, Nun is the child of two worlds. One face of the image rises up into the waters above (heavens) while the other descends into the waters below. Having been raised up by the Lamed and thrown into dissolution in Mem we incorporate the experience of each. Nun is the soul that dwells within our bodies and outside it in the Eternal realms. In its progress the soul swims between worlds and lifetimes. It is the truth of what we are and what we can become. Nun is the soul completing its work and preparing for its next development. It is the soul learning to surrender, to be true to itself.

Nun is that which is Holy in a person. It is the tiny spark of the Eternal singing in our depths. It is the music. Listen!

The Nun card shares some meaning with the Tarot card, Temperance, since it involves the mingling of opposites. Just as Temperance is preparing an interfusion, which at a later time will be ready for release, Nun joins the ocean of earth and ocean of heaven in its integrative dance.

When reversed, it is an indication that we are becoming divided by the temptations and distractions always clamoring for our attention. The Nun card in this position is a warning to not lose focus as we try to integrate the apparently opposite pulls of our life.

We are advised that while mingling our forces is important, there is some danger we may be succumbing to the temptation to dither away our time and energies. The Nun reversed may refer to a tendency for procrastination. Or, it may be an indication that we are allowing ourselves to become engaged with trivial or meaningless pursuits.

This is the time to consider the choices we would make if we were given only a short time to live. For the Nun, as our soul, reminds us that our days are numbered.