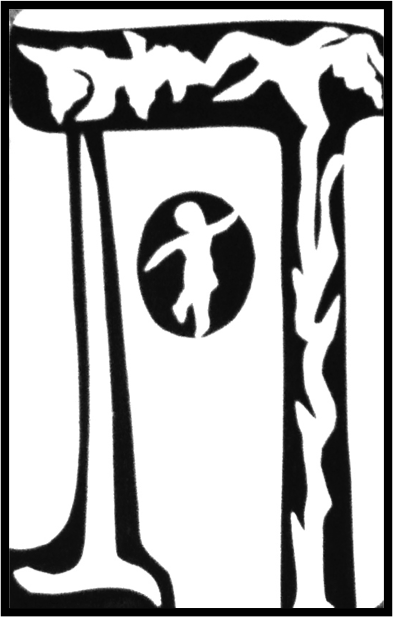 Essence: Symbolically, mark (of Perfection) in Tav, the perfect union of opposites, all forces and energies together, as both completion and beginning anew in a process of perpetual creation. Our lives fill with goodness, compassion, clarity and Truth.

Rider-Waite Tarot: The World or Universe

Tav is the number 400. Because it has two forms, one with the center Dagesh (dot) and one without a Dagesh, the letter Tav encompass the idea of perfection, perpetually beginning and ending only to begin anew. The Dagesh in the center of the Tav can be seen as the Aleph (1). Thus, the end becomes the beginning.

In the evolution of Tav (400) we begin with Dalet (4), the door through which all life must pass—the Mother perpetually giving birth. Next, in Mem (40) the Mother gives up the child The sacrifice of the mother/child relationship must happen for individuation to occur—so her child can become a man or a woman. Finally, in Tav the lovers have come together as reciprocal co-creators. Tav with the Dagesh is symbolic of the Female and Male of God with their Androgynous child. When Tav (400) is numerologically reduced to 4, it forms the Divine Quaternity expressed in the Divine, unpronounceable Name of God (Yod, Heh, Vav, He), both beginning and completion, which equals the number 8 (The Infinite One).

In Tav, Zayin, (the sword) is reversed to become a support for the Resh (head). Tav is symbolic of perfection: the dynamic union of opposites. Resh is the innocence of the original male/female androgyny, Shin is the new birth process, and Tav is the perfection that we are born from, and into. It is the absolute reciprocal union of male and female, within and without supporting and nourishing one another and, by so doing, joyously and perpetually birthing new creations.

In Tav, the desire and longing created by the sword of discernment and order finds fulfillment in union with the fertile and resonant chaos. It is the compassionate harmony, the interpenetration of these two cosmic principles, which allow all meaningful activity to take place. The Feminine Tree of Life and Wisdom rests over the sword, Zayin. Now, Zayin reversed has become the support for the abundantly productive tree, which is both supported by and supports the sword on which it rests.

Now, in a process of perpetual, perfecting creation, all aspects dance together. The completion of Tav provides us with the openness and clarity to live with the order in chaos, and with the chaos in order. Here is spontaneous joy that allows us to follow the path of our Heart. All aspects of life dance together and we are capable of living to our potential. Now, in spite of our fears, we can live with full participation in a paradoxical world, even if we never receive final answers to the mystery and meaning of our existence. Without ultimate guarantees, we nevertheless have developed our ability to love. By so doing, we appreciate the miraculous sacredness of all life.

Tav shares some meaning with the Rider-Waite Tarot, World or Universe card.
Tav is a card of goodness, activity, openness, of perpetual newness and compassion, of self-integration and growth.

In the Genesis of Shin, we were once again given choice, and this time chose the fruit of responsibility, wisdom and non-dualistic unity with the Divine. With Tav, we are given the opportunity to hear the voice of God again and to receive the healed Torah, where the black and white letters swirl in a dance of wondrous delight. The Dagesh in the center of the Tav is the twin-souled baby, the joyous prayer realized, the perfect healing of the Perfection. Tav is the Divine Vessel again whole and once more containing the light of the Infinite Divine compassion.

When Tav is reversed it’s a warning not to throw oneself away on the world through impatience and possessiveness. The attitude, “I want it all and I want it now!” cannot help but throw us back into a state of illusion and grief.

We are at risk of losing what we have journeyed so far to gain. Tav reversed might describe a situation similar to the story of the fisherman’s wife, who went from satisfaction to desiring and receiving more and more until at last she was thrown back into the poverty from which she had come, and in some sense had never left.