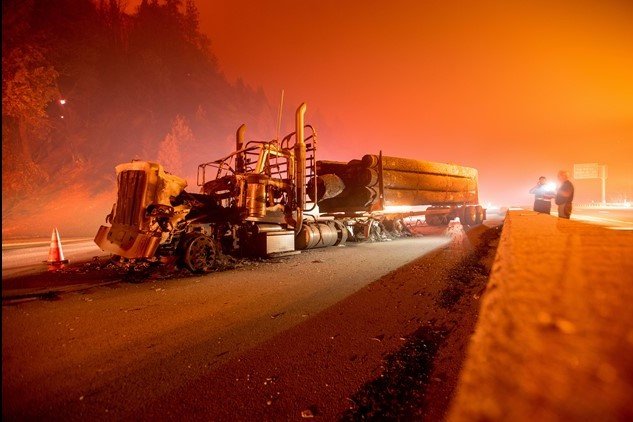 Once upon a time we had effective systems in place to quickly detect forest fires and enough resources to suppress them before they grew out of control.  A few got away, but with well coordinated efforts, the annual acreage burned between the 1940s and 1980s was reduced by 90%. So what happened?

Wildfire fighting has much in common with military campaigns, yet although we equate war with National Security we regard wildfire as a natural disaster. Both use air resources, mechanized heavy equipment and large numbers of “boots on the ground”. Yet where the military is lavished with the latest and greatest upgrades, to the tune of trillions of taxpayer dollars, wild fire preparedness has deteriorated to levels not seen since before WW II. Our leaders seem to have no problem pouring unlimited money and untold lives into foreign wars, with questionable public benefit, while our forests, towns and cities are destroyed by firestorms at an alarming rate. Despite major threats to public health and devastating losses to the economy, we dither about climate change and forest practices only to come up with half baked solutions like thinning and prescribed burns or, dumber yet, raking and pruning, none of which will save us. Dismissing it all as human caused global warming doesn’t help much either. Forest fires greatly exacerbate this very climate change. It is estimated that the recent Camp Fire in Northern California emitted as much CO2 in a week as all the cars and trucks in that state did in a year.

The one course of action which will really make a difference is to restore “initial attack” forces to levels maintained before the 1980s and put the fires out when they are small. Just like a military campaign, early detection and rapid response are far more effective than allowing the enemy to dig in. Small, well trained commando forces sent in immediately after a threat is detected, and with close air support, are far more effective than waiting for heavy armor to be assembled and bases to be established. Yet unlike warfare, fire behavior is predictable and small blazes will spread rapidly with dry fuels, heat, wind and low humidity. In war, the enemy is smart and cunning, in fire behavior we know what will happen and time is of the essence. Forest Service PR spokespeople and their cadre of armchair “experts“ are patently irresponsible to proselytize that we’ve suppressed too many fires in the past or, worse yet, allow fires to burn during fire season.

With long, hot, rainless summers in the West and solid conifer forests, wild fires have been a terrestrial feature since the ice age. Native Americans used fire effectively for maintaining healthy ecosystems, but with the post Columbian colonization of the west by non-native peoples, the environment, and now the climate, has changed irreversibly. The biggest land owner in the west is the U.S. Forest Service owning over 141 millionacres in Regions 1-6. California and Oregon together comprise about a third of that total. In some Oregon counties, such as Josephine, over two thirds of the land is Federal. There is much debate about the cause of wild fires but the really big fires on Forest Service land are almost all started by lightning. “Lightning Busts”, as they are called, haven’t changed much over the years but today the Forest Service response is anything but robust. Gone are the lookout towers, the Smoke Jumpers and District Crews; unmaintained roads have become impassible; and now they want to reduce EU (Exclusive Use) air tankers for the entire western US from 21 to 13 and then close the Medford Base to save $245,000 (approximately the cost of one or two houses). This is crazy in the face of hundreds of millions now spent on suppression costs, a ruined tourist economy, compromised human health, and the probable conflagration of entire communities. Where will it be next summer when we see burned out hulks of cars and trucks along the highway, subdivisions reduced to powder, and scores of people burned alive: Merlin, Illinois Valley, Butte Falls or East Medford? There is no such thing a “Defensible Space” in a firestorm.

A firestorm is a truly awesome event. Seventy four years ago the Allies deliberately started a firestorm over Dresden Germany. In the second week of February 1945, 3,900 tons of explosives and incendiary bombs were dropped from 1,250 B 17s, B 24s and RAF Lancaster heavy bombers, which resulted in the total destruction of 1600 acres of the city’s center and the incineration of 25,000 non-combatant civilians. This was six months before the age of atomic warfare was ushered into Japan and the morality of such actions is clearly beyond the subject matter of this monograph. The point is, however, that if we could muster that much airpower, two continents away and seventy four years ago to start a firestorm, doesn’t it seem possible that we could prevent one by utilizing large numbers of aircraft, on our own soil to protect our own citizens now in 2019? (Incidentally, Davis-Monthan AFB, near Tucson, AZ currently stores about 4,400 surplus, mothballed airplanes.)

The Forest Service response to this enormous threat is to tell us to get used to it. Their stated goal is to “treat” 20 to 50 thousand acres with prescribed burns and thinning over the next decade with no mention of bringing back initial attack forces; and how about the other tens of millions of acres untreated? It seems that the main concern of the Forest Service is to keep the fire industry happy at the expense of the public. Contracted equipment and personnel, from shovels to helicopters cost far less through government GSA procurement than through inflated retail costs passed on from contractors to the Government. For example, large helicopters cost almost $50,000 per day when hired on a CWN (call when needed) basis and jumbo air tankers $17,000 per hour, even if they are grounded due to smoke.

Fortunately, State crews (both ODF and Cal Fire) are not privatized and have proven to be much more effective as initial attack fire fighters. Department of Interior lands (such as BLM) are protected by the State, where Forest Service is responsible for its own. Both spent roughly the same amount annually on firefighting back in the 1980s, about two hundred million each but now the Forest Service is spending twoand a halfbillion(over a tenfold increase) where Interior is spending one fifth that amount. When fires start on Forest Service land the public gets the quadruple whammy: inadequate protection, a ruined economy, compromised public health, and then end up paying for all of it through the nose.  And, God forbid, if domestic and or foreign terrorists catch on to Red Flag weather; we better have a plan for initial attack to deal with it. The first smoke jumpers were trained to combat fires started by 9,000 Japanese balloon bombs launched on the Jet Stream in a last desperate attempt during the final months of the war to start firestorms all over the western States. Fortunately the military rose to deal with that threat at the time.

It is time to stand up and demand that wild fire be treated as a threat to national security again. This is not a matter of “left” versus “right” politics nor will it be decided locally. Forest Service policies must be changed and our representatives in the House and Senate can affect that. We need to contact them and demand it.